This is NGKF’s most recent construction update regarding office space.  I think it provides great insight as to what we’re not only seeing here in Utah, but across the nation.  Enjoy!

Construction activity is ramping up across all product types; however, with the exception of apartments, the rate of increase has been well below the prior expansion cycle. Further details are as follows: 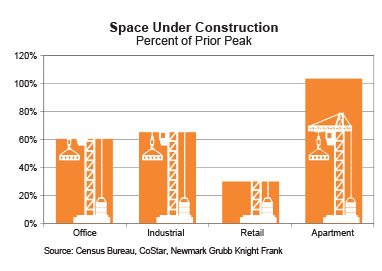 The moderate increase in construction can be attributed to greater caution on the part of lenders and stricter oversight by regulators following the financial crisis of 2008-2009. The coexistence of construction activity and tightening market fundamentals will continue for a while, with the exception of the apartment market, where supply and demand have reached equilibrium.