Wages are finally starting to accelerate after more than five years of lackluster growth. With consumer spending accounting for more than two-thirds of total GDP, this is welcome news for the economy. As incomes rise, the increased demand for goods and services will filter through to housing, business capital spending and other sectors of the economy, according to real estate experts.

The hourly earnings component of the Bureau of Labor Statistics’ monthly employment report shows that wages for private (non-government) hourly employees increased in May by 2.3% over the past 12 months, up from 1.8% as recently as December. Still, this is close to the range where it has resided since mid-2009. 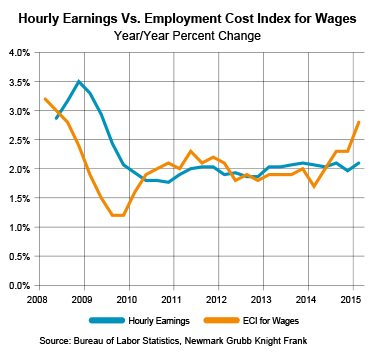 A different measure, the quarterly Employment Cost Index (ECI), also from the Bureau of Labor Statistics, shows a more pronounced increase, with annual wages for private sector employees up 2.8% as of the first quarter.

A broader measure of wages than the monthly employment report, the ECI covers both hourly and salaried workers, and it tracks costs for the same jobs over time, compensating for the fact that low-wage employers such as retailers, restaurants and hotels created a high percentage of jobs early in the recovery. The recent increase in the ECI reflects the shortage of workers in STEM occupations (science, technology, engineering and math) and other highly-skilled sectors of the labor market.

Increasing wage growth will show up in stronger consumer spending, which will support the economy broadly, and retailers and shopping centers in particular. Real estate experts say household net worth hit an all-time record of $84.9 trillion in the first quarter according to the Federal Reserve, and household debt as a percentage of disposable income hit a decade low of 106.5%, which will further support consumer spending.