The Census Bureau recently released its 2014 population estimates for the nation’s 381 metropolitan areas, defined as having an urbanized area of 50,000 or more inhabitants. The adjacent graph illustrates the one-year percentage change for the 53 areas with populations greater than one million. This is one more than last year, with Tucson, Arizona, crossing the million-person threshold. A few trends stand out: 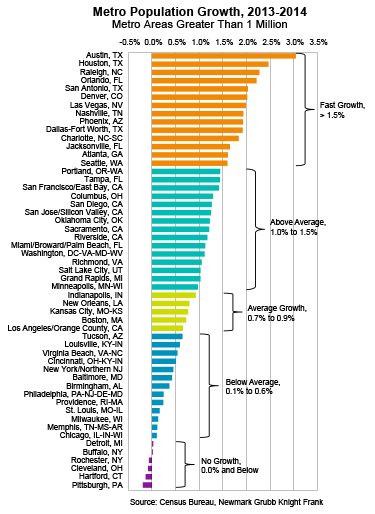 Population growth is one factor in a strong market for corporate occupiers and property investors, but it’s not the only factor. Analysts need to consider other demographic factors, such as education and household income, as well as the structure of the local economy and property market dynamics. Some of the strongest commercial real estate markets are in areas with middling population growth, such as New York, Boston and Los Angeles. Even metros with flat population growth, such as Pittsburgh and Cleveland, are experiencing an influx of skilled workers and higher-paying jobs that are bolstering their local economies, while lower-paying jobs are going elsewhere.